If you have made it this far you must be tired from your journey. After facing the onslaught of cat pictures, poorly-sourced news items, long lens pictures of starlets gussets, obnoxious advertising posing as pop-up games and terabyte after terabyte of sickening sickening pornography, your mind will have been dulled and battered like a recycled bloom in a disreputable swordsmiths forge.

Most online proselytizers would talk down to your average-to-below-average mind at this stage, offering succour to lull you into comfortable comprehension. I choose not to do this, mostly for your own sake, but also because I can’t be bothered writing in a way that suits idiots. Come on; is it really that difficult to keep up?

I won’t delve into the minutiae of what you can expect from this site, but suffice to say it will be a more gratifying, commercially viable and culturally challenging portal than my previous home at Darksome Utt’rings.

I know a lot of people have had questions about my absence from that site recently, and whilst this is not the avenue for exploring the realignment of my relationship with the Fisherians[1]. Despite what has been reported/graffitied in some quarters, I was not “kicked-out” by the Fisherians. After much discussion and debate I simply accepted their offer to let me leave[2]. Whilst it is true that I will no longer be posting on Darksome Utt’rings, I am entitled to maintain a presence there by way of a link to this very blog page[3].

I feel that this site will offer me greater opportunities to spur/incite debate, diversify revenue streams, challenge perceptions and ideally get a per word payment deal which means I won’t have to keep churning out this stuff with no immediate return.

It was the lack of motivation and innovative thinking from Johnny Fisher and his ilk that led to my choosing to accept the request that I refrain from posting on Darksome Utt’rings or attending any of their meetings, even remotely via speaker phone or through an interesting incognito Skype application I found in what is offensively referred to as “Darknet”[4].

Needless to say, I have no desire to eavesdrop on any of Johnny Fisher’s correspondence, because frankly we’re operating on different plains. Fisher is a romantic naïf who believes that “if the content is good enough, people will seek it out”. You, however, tired slack-witted internet user, and I know that attention-grabbing marketing approaches are the only way to increase brand awareness and with it page imprints and revenue potential.

In using future Fisherian membership dues as collateral for a loan to fund an advertising campaign on buses, I was speculating (with double-, often triple-checked Excel formulae to back up my projections) and taking a calculated (miniscule) risk to coast on the wave of an already popular and controversial advertising campaign.

Stonewall’s “Some People Are Gay. Deal With It” posters did wonders in popularising homosexual pursuits, to the extent that around London it is now nigh impossible to look at another man in a pub, at a public convenience, on the bus or near some secluded scrubland without assuming that he enjoys engaging in simultaneously invigorating and humiliating transactional sex acts at the drop of a hat[5]. What better campaign to piggy-back,[6] in order to get more attention for Darksome Utt’rings?

My poster (above) would’ve drawn traffic to the site, provoked fervent debate among users[7], and looked great on mugs, t-shirts, bumper stickers, framed posters, badges and those buggy-eyed furry things with a little stream of ribbon coming out the back of them.

Fisher and his acolytes unfortunately did not have the foresight to consider the long term benefits and were more concerned about how we would meet the cost of the Subway platter we’d had delivered to the meeting. Had they let me finish my Powerpoint presentation instead of shouting at me and trying to reattach half-consumed sections to the sandwich snake, they would’ve seen that this was only the beginning of a series of campaigns which would eventually get the Fisherian coffers back in the black.

After nailing the (some would say too-) powerful and expanding gay demographic, my next campaign would’ve enticed atheists, theists, pagans, parents and classicists all at once.

“What kind of a brilliant marketing mind could achieve that?” I hear you ask, your mind hopefully now able to construct valid, if predictable, rhetorical questions thanks to the intellectual workout I’ve given you since the opening paragraphs. That’s the kind of brilliant marketing mind. And before you can close your gaping mouth to ask “but how?” I’ll tell you.

Same approach, different campaign. Hijacking Stonewall’s campaign would get some significant attention, and before some lazy overpaid marketing executive could steal that idea off me and make everyone bored of it, I would already have lined up my pièce-de-résistance. It would open up all those demographics and also wring out the last drops of credibility in the clever bus-slogan-adaptation game.

Borrowing from the Atheist Bus “There’s Probably No God. So Stop Worrying and Enjoy Your Life” campaign, I would’ve had a massive bus and billboard rollout of “There’s Probably No Boreas. But I Wouldn’t Let Your Daughter Dance Alone Round The Banks of The Ilissos Just In Case.” Who could avoid being intrigued by that and not want to investigate the website and official merchandise portal of the people responsible? 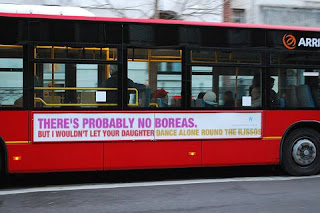 In , a nation plagued by winds, often capricious and conflicting, reminding the people of Boreas and his knavish antics (and by association Notus, Eurus, and the over-rated Zephyrus) would speak to their atavistic pagan instincts. The winds can be observed but not fully seen nor understood, they should rightfully be respected at the very least, if not feared and confronted where possible. My campaign would’ve spoken to that inner folk knowledge of the British and some visiting Americans.

Those dullards who are not suitably in touch with their vestigial pagan gene but who might still have disposable income available would be effected by the subtle pandering to their (notional) common sense and caution. They would also react to the acknowledgement of the un-spoken desire amongst most parents to avoid the possibility of their daughter being abducted, wrapped in a cloud and defiled by an elemental personification.

But this was not to be. When the dust had settled, the chairs been righted and the dirt and hair picked off the sandwiches which fell from the platter during one of the more heated points of the discussion, I realised I could no longer in good conscience contribute to the Fisherian projekt.

My parting words to Johnny and his cohorts were “Adapt or die.” The tide is turning and we can’t all live in our parents’ back bedroom with the freedom to create devastatingly profound and insightful sci-fantasy on a pro bono basis.

If I were to imagine Johnny and his works as a sword (the infatuation of one of his online disciples) they would be an intricate swept-hilt rapier. Beautiful, delicately rendered and deadly in the right hands, but essentially the affectation of a well-to-do 16th Century Spanish dandy. Against the devastating cut and thrust of my longsword[8] – brutal and seemingly cumbersome, but in fact surprisingly nimble, possibly with a double fuller for remorseless neck shots – Johnny’s rapier would be useless.

While certain epoch-obsessed chronological zealots may claim that my longsword is less modern and so less advanced that Fisher’s rapier, I would willingly meet them in the field and see which blade best fits the practical challenges of online marketing and user engagement.

Johnny Fisher and I are on separate paths, and I had to be the bigger man and make the decision to accept the overwhelming popular opinion against me. I wish him well, slapping metaphorical gloves across the faces of his fellow idealistic aesthetes, trading blows with the blunted edges and capped tips of their snazzily gilded weapons.

Johnny, though we must part, I shall always love you, like a brother, or a close relative with a broadly equivalent claim to a disputed throne, who lacks the guile and drive to catch the nearest way.

I have real battles to fight, no quarter given, none asked; limbs severed and thrown asunder by single blows; exposed links in armour hacked at with such furious abandon that blood, gore and marrow all bubble out in a hideous soup of bodily humours.

[1]The correct avenues are: the courtroom, in the event that the dispute cannot be solved amicably with the receipt of appropriate compensation and ideally a stringent confidentiality agreement put in place; then a scurrilous and unconfirmable paperback bestseller offering a thinly fictionalised account of events in an attempt to get around the confidentiality agreement; then a televised adaptation of aforesaid fictional piece; then a self-written corrective novelisation based on the televised adaptation but including new and more accurate revelations; hopefully then a film adaptation of said novelisation which will return rights and royalties to me; then maybe a cash-in Collected Correspondence of the Fisherians book.

[2] Amongst professional Association Footballers such “release clauses” are much sought-after and can cost well into the tens of millions of Euros, but I was fortunate enough to negotiate my severance at no personal cost and with barely a mention of eventually having to pay back certain unaccounted for moneys.

[3] Which will be given prominence in terms of size and position over the amateurish Swords Drawn link currently lowering the tone of the site, it’s solitary status exposing the nepotistic nature of the Fisherians

[4] Maybe there are some terrorists and paedos on there, but most of the guys I’ve been in touch with have been much like you or I – pretty nice fellas who happen to use their copious amounts of free time to engage in acts which are probably legal somewhere in the world, and given the lack of judicial jurisdiction on the WorldWide Web should at the very least be acknowledged as “not certifiable as illegal” online.

[5] I am aware that it is traditional in “gay” circles to use dropped handkerchiefs to indicate that a man is “up for it right now” or “wants it so bad and in a specifically depraved fashion”, the popularity of carrying around a reusable mucus receptacle has fallen dramatically in the past 40 years. Conversely, wearing superfluous affected headgear has never been more popular, across the sexual spectrum, so much so that many modern hat wearers are unaware quite how rude it is to neglect to remove one’s chapeau on entering a building. This led me to consider “at the drop of a hat” to be a very appropriate simultaneous metaphor and literal idiom for gay men to indicate their willingness to engage in flippant coitus.

[6] I sincerely hope the term “piggy-back” does not also allude to some pioneering homosexual act, but I daren’t look it up.

[7] “Are we to infer from that that some balrog do not have wings?”; “Was Tolkein using an extended visual metaphor when describing Durin’s Bane/The Balrog of Moria, or should we assume that this is one of the winged balrog to which the slogan refers?”; “Is ‘balrog’ the correct plural form of balrog?” and so on…

[8] This is not a literal longsword, nor should it be construed as a vulgar phallic euphemism, it is the metaphor for my works in contrast to Fisher’s, which I compared to a different type of sword in the previous sentence. If you’re not able to appreciate the connecting motif within a single paragraph I’ve no idea how you have got this far in the article unless you’re just reading the individual letters in each word aloud to yourself.
Posted by I_PWN_YER_MA_84 at 08:18

I_PWN_YER_MA_84
I_PWN_YER_MA_84 can be described in many terms, eschatologist; heresiarch; soothsayer; naysayer; truth-seeker; lore-smith; de facto Analyst at London’s fourth-largest data integrity consultancy. He is currently in consensual exile from www.darksomeschooner.net residing on Twitter as: @iPwnYerMa84